Pages forthcoming – thank you for your patience. 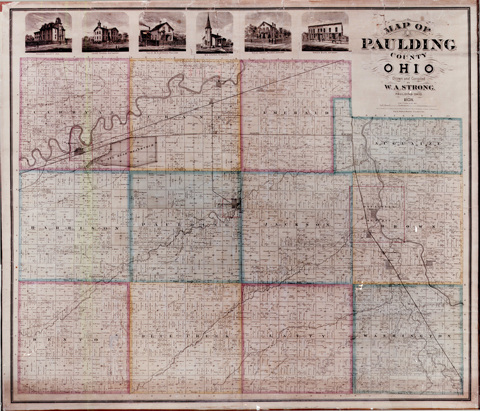 Traversed by the Maumee and Auglaize Rivers and numerous small streams, Paulding County is located entirely within that part of northwest Ohio once known as the Great Black Swamp. The first white visitors discovered a land dominated by water, mosquitoes and forest so thick that in some places the ground never saw the summer sun.

Celeron De Bienville was a French explorer who was instrumental in attempting to solidify French influence in the Ohio area. In 1749 his expedition, returning from an exploration of the Ohio River, traveled northeastwardly across the country along the Maumee River to the Great Lakes, then on to Montreal.

An army led by “Mad” Anthony Wayne marched through the County in 1794 en route to the Battle of Fallen Timbers. During the War of 1812, it was crossed again by General James Winchester, who fought a running battle across Emerald Township with the British and Indians. Also in 1812, Fort Brown was built at the confluence of the Big and Little Auglaize Rivers by General William Henry Harrison’s troops under Colonel Samuel Wells. It was later to be the site of the first post office in the County.

Paulding County was originally inhabited by prehistoric mound builders and later by Pottawatomie and Ottawa tribes. Some Indians were still present until 1832, when the last occupants of the Ocquinoxcas Indian reservation near Charloe were resettled. The first nonnative settlement waas near Junction in 1819, where on January 21, 1826, Danial Clark Carey, the first white child was born. Around this time, John Chapman, “Johnny Appleseed”, planted apple trees, catnip, pennyroyal and hoarhound in Carryall Township.

Surveyed in 1820, the County is named for John Paulding, one of the three men who captured the British spy Major Andre during the Revolutionary War. The first county seat was established in 1838 at New Rochester on the Maumee River the site of now an abandoned roadside rest along County Road 424. In 1841, the county seat was moved to Charloe on the Auglaize River, then relocated more centrally at Paulding in 1851.

Completion of the Wabash Canal in 1843 and the Miami and Erie Canal in 1845 opened the area to more settlement. Junction, a town that grew up a the junction of two canals, became a thriving community threatening to outrank Fort Wayne in importance. Opening of the Wabash Railroad in 1855, together with the presense of the Wabash Canal, made Antwerp the largest community in the County during the Civil War era. But the canals were unable to compete with the railroads and the Wabash Canal was abandoned by the State during the 1870’s. Construction of the Nickel Plate and New York Central Railroads during the 1880’s resulted in the rapid growth of other villages of the County, notably Paulding and Payne.

The State, however, had refused to abandon Six Mile Reservoir, which had been created to supply water to the Wabash Canal. The Resevoir was located near the Village of Antwerp, whose residents considered it a stagnant menace to public health. When legal efforts to close the resevoir failed, a group of 200 men marching under a banner inscribed ‘NO COMPROMISE”, blew a hole in the resevoir dike and destroyed three locks during the night of April 25, 1887. In response, a detachment of the State militia was dispatched, but the guilty parties were never identified. This event came to be know as the “Resevoir War”.

Lumbering and timber products were for years the leading industry in the County, but these resources were largely depleted by the late 1880’s, as the dense stands of native hardwoods gave way to pastures and farm ground. Today, the County is home to several manufacturing operations, but agriculture remains the leading industry.

The County motto, “No Compromise”, speaks of the resolute pioneer spirit and legacy of hard work and perseverance handed down for the last century. The people of Paulding County still reflect the spirit and pride and independence of those who tamed the Black Swamp so many years ago.

The following is an excerpt from O. Morrow and F. W. Bashore’s Historical Atlas of Paulding County, Ohio, published in 1892.

The building of the Wabash & Erie and Miami extension canals through the county was looked upon as being one of the most important events of the pioneer days. For many years they were the great commercial thoroughfares of the county, and did much toward its early development. Regarding their construction the following is taken from Hardesty’s history of the county, published in 1881:

“As early as 1816, the necessity of connecting the waters of Lake Erie with those of the Ohio River, by means of a navigable canal, was assented to, and a correspondence upon that subject was had between Hon. Ethan Allen Brown, of Cincinnati, and DeWitt Clinton, then canal commissioner of the state of New York. An act of the Ohio legislature was passed in February, 1820, authorizing the appointment of three commissioners to locate such a canal. The act also proposed to ask of the general government a grant of one or two million acres of land, the proceeds of which were to be applied to the construction of the canal. For some reason the commissioners were not appointed and no survey was made. In 1821-22, the subject of canals was again revived in the Ohio legislature, and on the 31st of January, 1822, a bill was passed authorizing an examination into the practicability of constructing a canal from Lake Erie to the Ohio River. Seven commissioners were chosen for that purpose, and competent engineers were appointed to make surveys, examinations, and estimates. Four routes were taken into consideration. The first from the Ohio River at Cincinnati to the Maumee River, and from thence to the lake; the second from Sandusky Bay to some point on the Ohio; the third to Traverse, up the Cuyahoga River, and then cross to the navigable waters of the Muskingum, thence down that stream to the Ohio; the fourth route was by way of the Grand and Mahoning Rivers. The Cuyahoga and Muskingham River route won the prize, and the Ohio and Erie Canal was constructed theron. In 1824, however, a survey was made of the Miami and Maumee River route, and an estimate of the probable cost of constructing a canal upon it was reported to the Ohio legislature at its session of 1824-25.

M. T. Williams, a member of the state board of canal commissioners, directed this survey. Samuel Forrer was the chief engineer, assisted by J. L. Williams, Francis Cleveland and Richard Howe. A great portion of the survey was through an unbroken wilderness. From where the town of St. Mary’s now stands to the Auglaize River, a distance of about forty miles, no signs of civilization were visible. On the banks of the Auglaize a squatter, named Thomas McClish, had made a small improvement. Here the party had an encampment, and also at Oquanoxa’s town, an Indian village, which stood up the present site of Charloe. The surveying of the Wabash and Erie Canal was commenced in 1826, but no finally completed until the autumn of 1828.

In 1827, Congress made a land grant to the state of Indiana, of one-half of the public lands on each side for a distance of five miles, of a proposed canal that would connect Lake Erie with the waters of the Wabash River. The Indiana terminus of the canal, and also of the grant, was at the mouth of the Tippecanoe River, 213 miles from the lake. The canal was constructed to Evansville, Indiana, a distance of about 500 miles from the lake.

In May 1828, Congress made a similar grant to Ohio, to aid in the construction of the Miami canal from Dayton to the lake; and also in the same act authorized the state of Indiana to convey to Ohio the right to all public lands lying within the limits of that state, upon such terms as might be agreed upon by those states. Accordingly commissioners were chosen from both states – one from each – who met at Zanesville, Ohio, in October, 1829, where Indiana, through her commissioner, agreed to surrender all lands within the limits of Ohio to the latter named state, on condition that she would construct the canal from the state line to Toledo, and give to the citizens of Indiana all the rights and privileges that were granted to the citizens of Ohio. Although the Miami canal was the first to be surveyed, yet the Indiana people were the first to begin their portion of the work.

The first ground of the Wabash and Erie was broken at Ft. Wayne in the spring of 1832. The work progressed slowly, and by the middle of 1835 only thirty-two miles had been completed. In 1840 the canal was opened between La Fayette and the east line of Indiana. Ohio was slower than Indiana to appreciate this needed channel of navigation, and Indiana, disappointed at this tardinesss, in 1840 sent their chief engineer to Columbus to urge upon the legislature of Ohio the speedy fulfillmentof their portion of the canal contract. The Ohio people commenced work immediately, and, in 1843, the final completion of the Wabash & Erie canal took place. The event was celebrated at Fort Wayne on the 4th of July of that year, and was participated in by citizens from both states, who listed to an able oration, delivered upon the occasion, by Gen. Lewis Cass.

The Miami canal was not comleted until 1845. These two canals, of which a brief history has been given, pass through Paulding county; the Wabash and Erie enters the county on the west side and passes through the northern tier of townships; the Miami enters on the south and has a course through the eastern tier of townships. They unite at the village of Junction.

The Indiana portion of the Wabash & Erie canal was entirely abandoned about the year of 1870. This, rendering worthless that portion of it between the state line and Junction, was also abandondoned by an act of the Ohio state legislature in 1888, further mention of which will be made later on under the head of “Reservoir War.” The Miami is yet navigable through the county and is in a tolerable state of repairs. That these canals have been of great benefit to the county cannot be gainsaidor questioned. When in full operation, they were the great navigable lines between Toledo and Evansville, a distance of over 500 miles; and between Toledo and Cincinnati, a distance of 242 miles. Upon them was conveyed – as freight – grain, lumber, and every other commercial commodity. A daily line of packets was established for the conveyance of passengers and the United States mail. These packets were drawn by three horses, driven on a brisk trot, and changed at relays ten miles apart. The schedule time to be made was six miles an hour. Doyle & Dickey were the proprietors of the best line of packets ever established upon these canals. Junction was then the best place of transfer for the southern and western branches of the line. Once at that place, while the Wabash packet was waiting for the one from the south, its horses were all stolen, while the driver was regaling himself in a neighboring restaurant. After some inconvenience and a short delay a new team was promptly purchased and the swift gliding craft proceeded on its way. The proprietors threatened to prosecute that horse thief for obstructing the United States mail, but he was never caught. The through lines of packets were abandoned about the year of 1852, as the age of steam had at that time gained a firm footing, and railroads afforded a much more rapid transit.”